Planning Your Work… and Working Your Plan

As a storyteller and performer, I attended a Marketing Workshop in Greensboro, NC this past Saturday, February 17th. This free workshop, sponsored by the North Carolina Storytelling Guild, was organized by guild President, Kelly Swanson. And what a wonderful workshop it was! It was entertaining as well as a way to learn more about marketing myself as a speaker and storyteller - also to network with other fellow storytellers and writers. There is so much that we can share with one another. I have never been the best at “tooting my own horn” so this was the perfect opportunity to pick up some great tips.

The workshop was divided into three segments with Kelly, Pamela King Cable, author of Southern Fried Women and Laura Hamilton, Executive Secretary of the National Speakers Association/Carolinas as our presenters. I could tell that these ladies loved what they were doing and they gave their all. I have heard nothing but raving comments about their presentation. I continue to be on a high from the workshop and look forward to learning more from these three presenters. Kelly worked with excitement and diligence to provide this learning workshop that immediately followed the guild’s board meeting.
(You may click on their names above to learn more about them.)

Just hearing the word marketing has always frightened me. The topic seems so broad because there are so many possibilities out there when marketing oneself. I learned one simple rule from Kelly from the very beginning that seemed to console me. She said, “Don’t be overwhelmed at so many ways of marketing. Select the things that you pick up on and go with it.” Following this comment, I was definitely all ears.

I believe that hearing from these lively speakers with their diverse perspectives on marketing has given me a new perspective. Now I am geared up to cross more boundaries! My first decision was to update my websites photos and begin a new blog this week. I have intended to make changes in my site but this was the incentive to do it!
Posted by sylvia at 10:25:00 PM

sylvia
Sylvia Payne, a North Carolina Storyteller, comes from a diverse background of Scots Irish, English, and German ancestry. She grew up in the North Carolina foothills listening to family stories told by her mother. A graduate of High Point University and a former children’s librarian, her repertoire includes world folktales, stories of history, legends and family stories. With more than 30 years’ experience, her animated style, and her stories captivate and transport the listener into an imaginary world. In addition, she conducts workshops for parents, teachers, and college and university students. She serves on the North Carolina Storytelling Guild Board and is editor of the Guild’s bi-annual publication, Journal of Tar Heel Tellers. Sylvia has studied with such storytelling masters as Donald Davis, David Holt, Tim Lowry, Connie Regan-Blake and Donna Marie Todd.

Storytelling in Our State

As a member of the North Carolina Storytelling Guild, I was thrilled when I learned the editors of Our State Magazine chose to feature “Storytelling” as the theme for their November 2006 issue. The feature began with an article about the late great storyteller, Ray Hicks, written by Lynn Salsi. Ray was known as the master of storytelling and was the forerunner of the storytelling revival that began in the 1970’s. He carried on the oral tradition of his ancestors. They brought their own folklore stories with them as they migrated to the Appalachian Mountains. These stories included the Jack Tales, which Ray just loved to tell. He loved them so well that he was sometimes considered to be “Jack” himself.

It is a great honor for me to have been selected as one of nine North Carolina storytellers who were featured in this issue. Storytelling profiles included Connie Regan-Blake, Sheila Kay Adams & husband, Jim Taylor, Willa Brigham, Jerry Wolfe, Joan Leotta, Ron Jones, Marvin Cole, Wright Clarkson, and myself.. 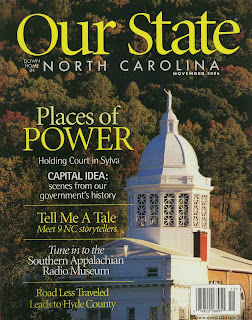 Reprinted with permission from Our State magazine [November 2006, page 108-109] and from the author.

When Sylvia Payne recalls being called on by her fifth grade teacher to speak in front of the class, she remembers being “scared to death.”

“But I did it and survived,” she says with a smile. “Little did I know where it would lead.”

Today the Hickory resident is a professional storyteller and board member of the North Carolina Storytelling Guild (NCSG). She also serves as the current membership director and editor of the guild’s quarterly publication, Journal of Tar Heel Tellers.

Payne’s friend and fellow storyteller, Terry Rollins, launched the journal in 1994. After the NCSG was founded in 1998, Rollins brought the project into the guild, staying on as editor. When he retired from overseeing it, her fellow guild members recruited Payne to take over his duties.

Payne, who grew up in the North Carolina foothills listening to her mother’s stories, has been a teller for nearly 30 years. She travels the Southeast presenting workshops and taking the art of storytelling into schools, libraries, civic organizations, churches, colleges, and festivals. She also speaks at luncheons, banquets, and museums. And along the way she harvests new material to add to her repertoire, which includes family and personal stories, historic legends, ghost stories, and folktales from other cultures around the world.

“I began telling stories while working in the public library,” Payne explains. “My supervisor wanted to offer afterschool programs for students. She said something like, ‘We are going to learn folktales and share them with the children. We will start by learning to tell the Jack Tales.’ ”

For Payne, the assignment was a challenge. “I nearly dropped my teeth,” she admits. But she rose to the occasion — and the podium — and, in the process, discovered her true calling.

Payne believes that we are all storytellers in our own way. “To be most effective, the storyteller must be in the moment,” she says. “The narrator or the teller becomes the force in the story.”

Ironically, Payne says that the words themselves play only a minor part in the telling of a good tale.

“If you were to read the same phrase in print, the entire meaning would be lost. You only have one dimension — words. That’s it. Telling a story is quite different from writing one. When you read a story or narrative on the printed page, it is flat.”

Unexpected words from the mouth of a former librarian, no doubt. But Payne explains that speaking stories brings added flavor to them that is impossible to capture with ink and paper. “Telling the story orally lifts it off the page and out into the open. It’s an entirely different world, transformed into something new and fresh. It becomes alive, exciting, and imaginative.”

The written word does, however, have a respected and useful place within the community of professional tellers. The Journal of Tar Heel Tellers strives to keep the NCSG members connected. Each issue includes a message from the organization’s president, a calendar of storytelling events, a thought-provoking quote, interesting tidbits of news about members, and a brief editor’s note. The journal also reviews books and CDs published and released by members and features a different North Carolina storyteller in almost every issue.

Articles cover topics like how to adapt and craft a story, true accounts of “storytelling nightmares where things go dreadfully wrong before or during a storytelling performance,” and news of workshops and festivals sponsored by the guild and by storytelling groups around the state and beyond. One recent issue featured journal contributors’ “growing up” stories about experiences during their younger years.

What the quarterly publication doesn’t provide, however, are tips about how to count money faster. “We used to get lots of calls from people who thought the journal was a trade publication for the banking industry,” Payne says with a laugh. “They figured we were a guild of Tar Heel bank tellers.”

A tale well told will transport those who hear it, on the wings of their own imagination, to a destination that is often a place of adventurous or uplifting self-discovery, Payne says. One of her most memorable storytelling moments was when she was invited to tell stories for Hospice for Kids. While talking to the program’s organizer, Payne learned that the children all suffered from grief due to the loss of someone dear to them. What they really needed, the woman explained to her, was to hear stories about people who faced adversity and overcame it.

“When I hung up the phone, I knew that facing my worst enemy would be a piece of cake compared to this bombshell just dropped into my lap,” Payne says. “What stories could I possibly tell that would teach kids as young as five about overcoming adversity?”

About midway into the program, Payne realized that the children were motionless, gazing at her with absolute attention. “‘This is unbelievable,’” she remembers thinking. “It was like they were frozen in time.” After the program, a number of the children came forward to hug Payne and thank her for sharing her stories with them.

“I was given something to share with them, something that reached into the depths of each little soul. I drove away with tears in my eyes, humbled that my horrible nightmare had turned into such a rewarding experience.

“We must give hope through the stories that we tell,” believes Payne.

“As God’s creatures, all of us experience many of the same internal feelings, such as fear, need for love, frustration, hope or hopelessness, joy, and sadness.

I want the audience to feel hope and compassion and to better understand one another through my story.”

Reprinted with permission from Our State magazine [November 2006, page 108-109] and from the author.

sylvia
Sylvia Payne, a North Carolina Storyteller, comes from a diverse background of Scots Irish, English, and German ancestry. She grew up in the North Carolina foothills listening to family stories told by her mother. A graduate of High Point University and a former children’s librarian, her repertoire includes world folktales, stories of history, legends and family stories. With more than 30 years’ experience, her animated style, and her stories captivate and transport the listener into an imaginary world. In addition, she conducts workshops for parents, teachers, and college and university students. She serves on the North Carolina Storytelling Guild Board and is editor of the Guild’s bi-annual publication, Journal of Tar Heel Tellers. Sylvia has studied with such storytelling masters as Donald Davis, David Holt, Tim Lowry, Connie Regan-Blake and Donna Marie Todd.
Newer Posts Home