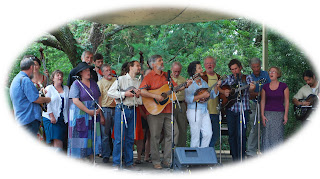 For several years I’ve had a yearning to attend the Ocrafolk Music and Storytelling Festival in Ocracoke, NC. Well, life kept getting in the way. So this spring my husband and I decided that we must take action and do something about it, despite other commitments. Otherwise we could grow old and wake up one day only to realize we never got there.

While I busily worked on a storytelling newsletter, my husband began making call after call, searching for reservations for the festival held in early June. He discovered that places were either booked or we must make a commitment for one week’s lodging going from Saturday to Saturday. This was absolutely impossible. Our plans were to arrive several days prior to the festival and stay through part of the following week and enjoy the quaint village of Ocracoke. After all, we hadn’t visited there for many years.

Finally, after more brainstorming we had the answer. We’ll stay somewhere close. Well - as close as you can by taking a ferry to Ocracoke and back each day. That left one area - Hatteras Island near Hatteras Village. After more calls, he found our place, which was only five minutes from the ferry dock. Whee! Now we were truly excited. To make a long story short we spent 12 fun days on and near the Outer Banks, including seven days at Ocracoke, before returning home. We attended most of the Ocrafolk Festival, which was thoroughly worth every moment we spent there.

Donald Davis who lives on Ocracoke and John Golden from Wilmington, NC were among the line-up of performers. Donald and Rodney Kemp, a historian and storyteller from Morehead City, were featured storytellers. Donald and Rodney’s performances were sandwiched between the musicians on Saturday, creating a pleasurable balance between music and storytelling. Donald performed stories on two separate stages during the day on Saturday. Of course we took in both performances. Several of his ‘growing up’ stories may be found in his newly published book, Tales from a Free-Range Childhood. Whether or not you’ve heard Donald enthrall a crowd with his stories, you would definitely enjoy reading his new book. We bought our copy while at the festival.

I realize how fortunate we southerners are to have so many festivals, including storytelling festivals around the state of North Carolina. I met five or six people during the Ocrafolk Festival who moved here from other states, particularly northern states. They told me they had never seen or heard storytelling until they moved to this state and heard about this festival. Most of them presently live in the eastern part of our fine state. Each professed to have fallen in love with storytelling and with the style of music performed during this festival.

A few of our favorite musical groups that performed were the Ocracoke Jazz Society (and I’m not the greatest jazz fan), Molasses Creek (from Ocracoke), the Steel Wheels (from Virginia), Beleza Brasil, and of course John Golden. Both John Golden and Donald Davis shared their musical talents during the day Sunday with the morning and afternoon Gospel Singing. The Ocrafolk Festival is definitely recommended if you have never been. The dates for 2012 are June 1-3rd. I warn you, make your reservations early. Check out the festival website at: http://www.ocrafolkfestival.org

Labels: music, North Carolina storyteller Sylvia Payne, North Carolina storytellers, Ocrafolk Festival, vacation
sylvia
Sylvia Payne, a North Carolina Storyteller, comes from a diverse background of Scots Irish, English, and German ancestry. She grew up in the North Carolina foothills listening to family stories told by her mother. A graduate of High Point University and a former children’s librarian, her repertoire includes world folktales, stories of history, legends and family stories. With more than 30 years’ experience, her animated style, and her stories captivate and transport the listener into an imaginary world. In addition, she conducts workshops for parents, teachers, and college and university students. She serves on the North Carolina Storytelling Guild Board and is editor of the Guild’s bi-annual publication, Journal of Tar Heel Tellers. Sylvia has studied with such storytelling masters as Donald Davis, David Holt, Tim Lowry, Connie Regan-Blake and Donna Marie Todd.
Newer Posts Older Posts Home