I will never forget the time my sister found a box of Mother's old letters.  They were in a slightly worn box tucked under a stack of old quilt scraps.  Inside, cloaked beneath a sheet of embossed tissue paper, were letters dating back to the early '30's.  Some were addressed to my mother before she married, others came after. 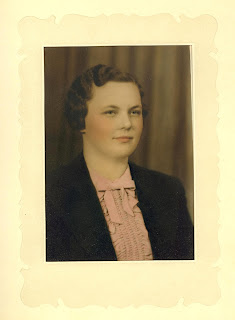 My Mother
I pulled out a fat envelope postmarked June 30, 1932.  There were twenty handwritten pages from her classmate and good friend, Belle.  School was out for the summer.  The letter began May 30th and wasn't finished until a full month had passed.  It's obvious this young lady had a very busy summer.  She wrote, "I've been hoeing cotton all day today and I'm so tired I can hardly wiggle.  My back hurts so bad... but we do have fun hoeing cotton.  I'd rather be hoeing than to be at the house."


Belle's labor continued with no wrap-up of her letter.  "I have been hoeing this evening and almost got snake bit.  It sure did scare me but I killed it... it was a great big snake.  A copperhead.  I guess it would have killed me if it would have bit me."


The next portion of her letter reflected sadness and disappointment.  She said she was unable to attend school that fall.  Because of that she feared her countless hopes and dreams would be lost.  Nonetheless, deep within she didn't give up entirely.  Deep within her soul, she clung to a strand of hope.  She also spoke of missing the camaraderie of her classmates.


The letter reflected a laborious way of life in contrast to jobs for the average young woman of today.  Times were tough back then during the Great Depression (1929-30)


Often farmers were the ones who survived in the south.  They lived off the land.  At least they could grow small crops to sell with enough food set aside to last the family though the winter.  It usually held them until early spring crops came in.


In a later paragraph, Belle's mood became positive.  She expressed her thanks and appreciation to my mother for being her close trusted friend.  She was confident that my mother would always guard their teenage secrets. 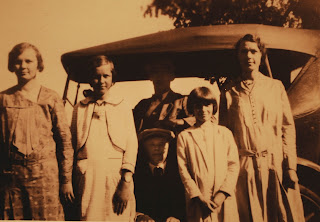 My Mother and siblings


I wonder about Belle's outcome in life.  I do recall my mother speaking of her.  Knowing the determination and resilience my ancestors had during hard times I believe Belle never gave up.  I think she clung to hope and faith, just as my mother's family did.  That's all these unwavering families had.  They passed their attribute on to the next generation.  The world has changed drastically since then.  I hope and pray this courage and buoyancy is reaching our young generation.
Posted by sylvia at 2:50:00 PM

sylvia
Sylvia Payne, a North Carolina Storyteller, comes from a diverse background of Scots Irish, English, and German ancestry. She grew up in the North Carolina foothills listening to family stories told by her mother. A graduate of High Point University and a former children’s librarian, her repertoire includes world folktales, stories of history, legends and family stories. With more than 30 years’ experience, her animated style, and her stories captivate and transport the listener into an imaginary world. In addition, she conducts workshops for parents, teachers, and college and university students. She serves on the North Carolina Storytelling Guild Board and is editor of the Guild’s bi-annual publication, Journal of Tar Heel Tellers. Sylvia has studied with such storytelling masters as Donald Davis, David Holt, Tim Lowry, Connie Regan-Blake and Donna Marie Todd.
Newer Post Older Post Home